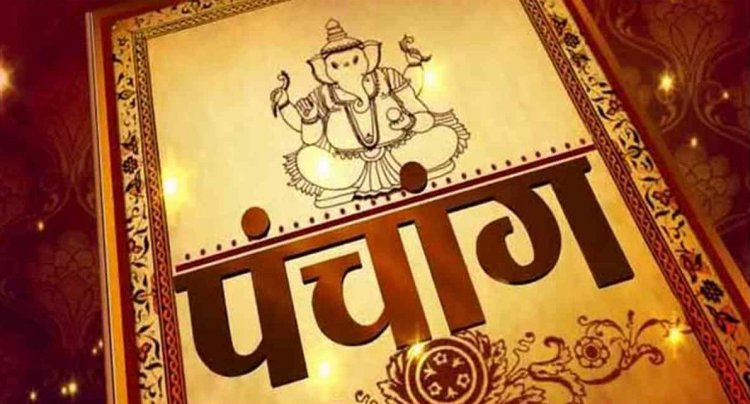 Panchang is a part of Hindu Vedic astrology which helps in identifying auspicious and important times. Let's know, let's know what is the panchang?

The major five parts of all subjects or objects are called panchang. Daily information of the five parts of Indian astrology is given in the panchang. These organs are Tithi, Var, Nakshatra, Yoga, Karan. The date is formed by the difference between the Sun and the Moon. On the full moon, the Sun and the Moon live in front of each other and on the new moon together. The seven planets have been composed due to the complete planet being seven.

There are also 12 months in the Hindu calendar i.e. Panchag. There are two 15-day Paksha in each month, Shukla Paksha and Krishna Paksha. Each year there are two trajectories. 27 constellations continue to travel in the zodiac signs of these two ayans. The practice of keeping 12 months a year and 7 days a week started from Vikram Samvat. The account of the month is kept at the speed of Sun and Moon. These 12 zodiac signs are twelve solar months.

Sankranti occurs on the day the Sun enters the zodiac sign. The naming of months has taken place on the basis of the constellation in which the Moon is on the full moon day. The lunar year is 11 days 3 times 48 moments shorter than the solar year. That is why a month is added to it every 3 years, which is known as Adhik Maas, Mal Maas or Purushottam Month. There are thirty days in each month. Shukla Paksha and Krishna Paksha are divided on the basis of decreasing and increasing phases of the moon in the month.

One day is called Tithi which ranges from nineteen hours to twenty four hours depending on the almanac. The day is divided into twenty-eight hours as well as eight riders. A stroke is about three hours. There are about two clock in an hour, one moment is equal to about half a minute and one moment has twenty four moments. According to the watch, there are four days and four nights.

Five parts of the Panchang

In Hinduism, Muhurta is definitely seen before doing anything auspicious. Actually, it is believed that Panchang must be seen before any auspicious work. Panchang can be called an ancient Hindu calendar. The almanac is composed of five limb words. We call it almanac because it is made up of five major organs. They are the five major organs - Nakshatra, Tithi, Yoga, Karan and Var. Which day is so auspicious and how inauspicious, it is known through these five organs. Let's know about the importance of almanac and its five parts.

1. Nakshatra - Nakshatra is the first part of Panchang. According to astrology, there are 27 types of constellations. But a 28th constellation is also counted at the time of taking out the Muhurta. It is called, Abhijeet Nakshatra. Constellations are seen while performing marriage, planetary entry, education, vehicle purchase etc.

2. Tithi - The second part of the calendar is date. There are 16 types of dates. Of these, Purnima and Amavasya are the two main dates. Both these dates definitely come once a month. According to the Hindi calendar, the month is divided into two parts, Shukla Paksha and Krishna Paksha. The period between Amavasya and Poornima is called Shukla Paksha. At the same time, the period between Purnima and Amavasya is called Krishna Paksha. By the way, it is believed that no big or important work is done during Krishna Paksha. It is said because at this time the powers of the moon weaken and darkness prevails. So that's why all auspicious work such as marriage is decided at the time of Shukla Paksha.

3. Yoga - Yoga is the third part of the almanac. Yoga can have a profound effect on the life of any person. There are 27 types of yoga considered in the almanac. There are some types of it - Vishkumbh, Dhruva, Siddhi, Variyan, Paridhi, Vrittha etc.

4. Karan- The fourth part of the almanac is Karan. Half of the date is called Karan. There are mainly 11 types of Karan. Of these, four are fixed and seven change their place. Bava, balava, oil, snake, commerce etc. are the types of Karan.

How Children Can Bring Love & Solve Quarrel Between The...

Why there is Stress in Married Life And How to Solve Them?