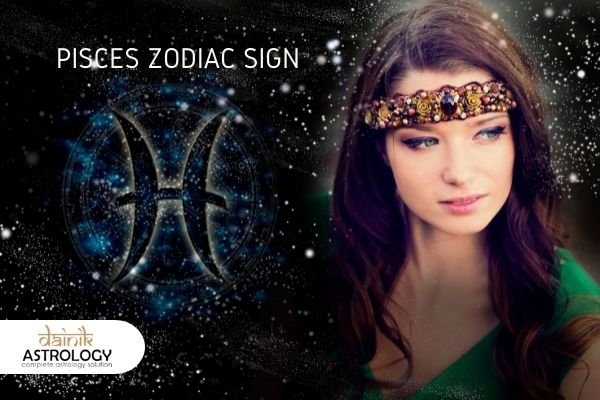 Pisces people are quick-witted, imaginative, and perceptive. They have exceptional psychic powers and a strong gut instinct. The Pisces zodiac personality has a strong sense of intuition, which they utilise to assess people and circumstances. In addition to being perceptive, Pisces is also rational and intellectual, which perfectly reflects its unique nature. The changeable polarity is attributed to the Pisces zodiac sign. A polarity or modality is the symbol of expression for a zodiac sign, and it can be cardinal, fixed, or variable. Because of its variable polarity, Pisces may easily blend in with its surroundings. As Pisces' governing planet, Neptune governs creativity and imagination. It reveals the Pisces personality's secretive, dreamy, and creative side.

The Pisces sign emblem is directed by a Fish, much like the term "Pisces" implies. The Pisces Glyph or Symbol displays two fish swimming in opposing directions yet connected by a cable. They can stay united with the aid of this cable. The Pisces Symbol represents the zodiac sign's underlying motivations and psychic talents. Pisces is the zodiac sign associated with imagination and mystery.

Neptune is the planet that governs Pisces. A trident pointing upwards rests atop a cross, which represents Neptune. A receptive crescent forms the base of this trident, while a cross represents substance. It represents the soul's desire to be free of materialistic restraints.

Pisces zodiac personalities are recognised for being inventive, insightful, and giving, but they are much more than that. They are astrology's most caring and thoughtful people who are immersed in their own dream world.

Being a water sign, they are supposed to have strong emotions and a volatile demeanour, yet they are unexpectedly laid-back. A Piscean personality is respected and admired. Pisces is the zodiac's final sign, and its personality is extremely similar to that of a psychic. They have the ability to read between the lines and quickly assess the state of a situation. They understand the brain's power and appreciate all that surrounds it, including profound thought.

The zodiac sign Pisces has a very inventive nature. This is a strength, but it can also be a struggle since they spend too much time overthinking situations and become frustrated when they can't come up with a solution. They also have to deal with emotional fragility. Pisces are always willing to help anyone who needs it, but they reject asking for aid because they believe no one will understand what they are going through. The Pisces zodiac type faces a significant barrier in learning to speak up about their emotional condition. Other zodiac signs find it difficult to comprehend Pisces' thoughts, which is why they characterise him as confusing. This brings out Pisces' protective nature; they become upset and isolate themselves.

So, for those who were born in the month of Pisces, here is a quick summary. Your zodiac sign might give you a decent indication of your positive and negative characteristics, but that's not all. A zodiac sign can only offer you a snapshot of who you are. Visit Dainik Astrology for a comprehensive examination of your personality and future prospects.

What is Taurus Lucky Color for the year 2022