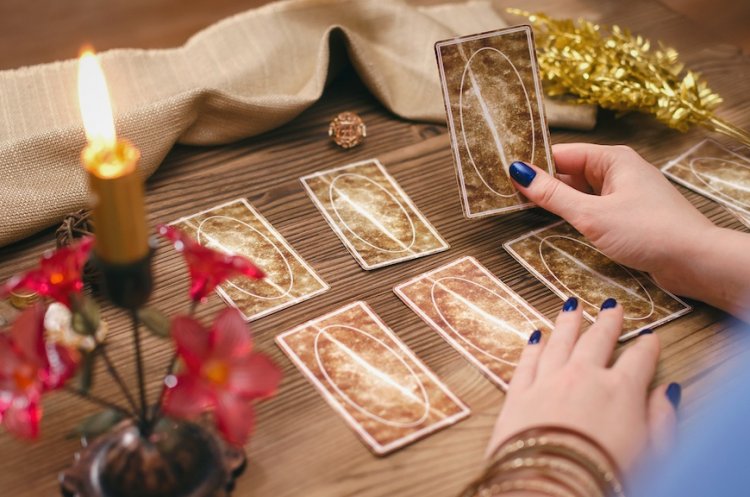 Do you know what is the meaning of tarot card reading? "Tarot card reading" means a woman in flowing robes, leaning over a small table in a candlelit room, foretelling impending doom.

How did tarot card readings start?

The tarot is in essence a soul map, a deep psychological guide to self-empowerment as imaged through 78 symbolic cards.

Tarot card readings have long surpassed the chintzy, neon “Fortune Teller” sign store front stereotype, which gives tarot a bad name and should be avoided. Scholarly research indicates that the cards originated in Italy in the 1500s where they were used as a game, called Tarocchi, by the very wealthy. They weren’t interpreted for spiritual divination until the 18th century.

Keep your options open: If you have the answer before the reading, then you're not allowing the cards to guide your overall decision. Bunning offers this example: Asking how you could encourage your mother-in-law to move out, as opposed to asking how you can get along better with her, is narrowing the scope of the true question by answering it before you even get started.

Find the best level of detail: Your question should be focused but not overly detailed. Rather than looking at one aspect of a problem, find a way to look more broadly at it. For example, rather than asking how you can make your home life less chaotic, ask how you can better balance the family's schedules.

Focus on yourself: If the reading is for you, make sure your question centers on you rather than on someone else who you think may be the root of your problem. For example, asking why your teenager is experimenting with drugs is focusing on them, not you. Asking what role you play in your teen's decision to experiment with drugs brings the question back to you.

Stay neutral: Your question shouldn't convey a preconceived notion that your view is necessarily the right one. For example, asking why you're doing more work around the house than your spouse isn't neutral; asking how you can get more cooperation from your spouse when it comes to housework is neutral.

Be positive: This one's straightforward. Instead of asking why a specific event hasn't happened, ask what you can do to help make that event happen.

Open readings address the larger aspects of your life rather than a specific problem area or question. They're usually done when you're entering a new phase of life, such as getting married, graduating from college or starting a family. You can somewhat direct the reading if you have a general area you want to cover, such as your career or health, but that's as specific as the direction gets.

There are many varieties of Tarot decks, and there is no standard number of cards across all decks. While the types of cards, the suits and their meanings are the same, the illustrations vary greatly. Decks are based on various themes such as nature, animals, fantasy, dragons, etc. This 78-card deck was the only readily available deck, which is why some consider it the "definitive" tarot deck.

Before a reading occurs, the person receiving the reading shuffles the cards. Some say this transfers that person's energy to the deck. The person receiving the reading also should be concentrating on the question or area for which they want guidance while he or she shuffles the deck. In some more traditional circles, a more elaborate sorting and separation of the cards is performed.

Once the cards are shuffled and the deck has been cut, the reader lays out the cards in a pattern called the spread. Each position in the spread has a meaning, and there are many different types of spreads, ranging from those that incorporate a single card to spreads that include all 78 cards of the deck. Which spread is used is up to the reader and the specific type of question or reading.

Some spreads focus more on a specific type of information. For example, one spread might concentrate more on emotional matters, while another might bring in more information about the influences of others. One of the most common spreads is the Celtic Cross. However, there are many more spreads for Tarot card reading, and readers can even make up their own.

Most Common Problem in a relationship when you're living...