Most Important Yogas in Vedic Astrology 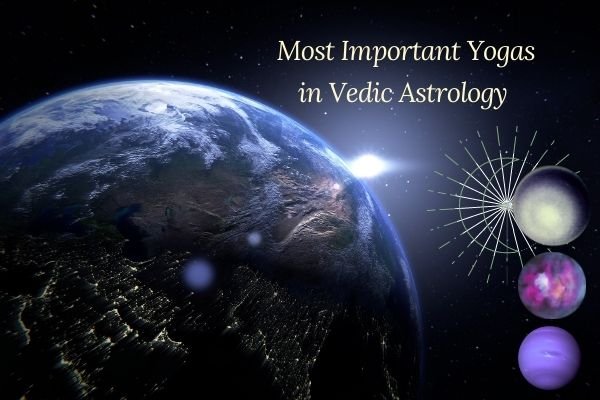 Most Important Yogas in Vedic Astrology Yogas in astrology

Yoga is synonymous with addition, unification, harmony, and togetherness. When planets are in Yoga, they function in harmony and synchrony. The outcome of their combined efforts is dependent on several factors, including their innate makeup, likes and dislikes for each other, house lordships, location in a sign and house, strength, avastha, char karka, and so on.here I will be telling you about the yogas present in one's birth chart.

In astrology, there are four types of Yogas

On the basis of planetary yoga, astrology fulfills all auspicious tasks like horoscope, marriage, house construction, astrology prediction, Muhurta. In this article, you can find out more about the four types of yoga.

2. Yuti or Conjunction Yoga: Conjunction Yoga occurs when two or more planets are placed or conjoined in the same sign.For example, the Sun and Mars are both in the sign of Gemini.

3: Graha Drishti Yoga (through Planetary Aspect): This sort of yoga is practiced when two or more planets aspect each other via Graha Drishti.Because of their location, planets from the Sun to Rahu have an influence on the 7th sign. Also, we include special & full aspects of the outer planets like Mars, Jupiter, Saturn & Rahu for this Yoga.

For example: when Jupiter is placed in Cancer then Rahu will take its position in Pisces. Sun will be placed in Aries and Moon will be placed in Libra.) Dispositor Graha Drishti (Tadisha) Yoga: The term "depositor" refers to the lord of the sign in which a planet is located in Jyotish. So this yoga is established when one planet is situated in the sign, lorded by another planet, and aspects his disposition.

We assess yogas mostly based on their house lordships from Lagna. Yoga, which is generated by natural friendly planets in strength, produces excellent effects.

Three types of Yoga are present they are auspiciousness and inauspiciousness, or attributes of results such as  Raj Yoga, Dur Yoga, and Vipreet Raj Yoga.

Yoga which is created by Mars and Sun is of a Leo native, for example, is a highly potent Raj Yoga since the planets possess only trine and quadrant houses.

yogas which are created by Mars and Sun for a Leo Lagna native are highly potent Raj Yoga where the planets are placed in their trine and quadrant houses.

A yoga created by Mars and Sun for a Leo Lagna the favorable outcomes.

3: Vipreet Raj Yoga: They provide early sorrow, failure, and disappointment for the native, but subsequently benefit/gain from the loss, agony, or death of others.

It is produced when the lords of just the inauspicious houses (6,8,12) join a union, ideally only in these houses.

This Yoga is especially favorable when it happens in the Ascendant's Dusht Sthana (6,8,12th house).

Reconsider your Ex Relation to Get Ex Love

What are the health benefits of Aloe Vera Juice? And how...