What Is Pink Aura - Its Color, Meaning, And Effects On Personality 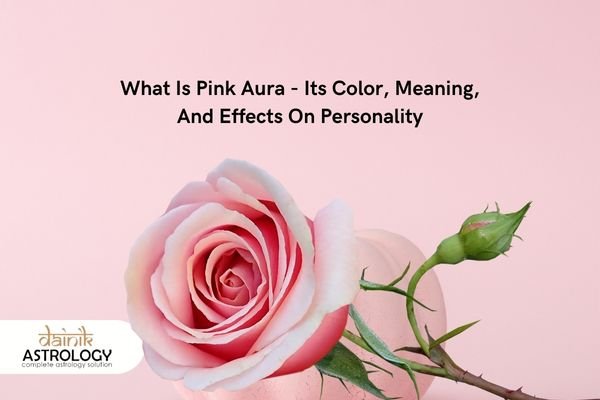 What Is Pink Aura

Auras come in a variety of colours, from white to blue to green to red. What does it mean to have a pink aura? Every living thing has an aura, which is nothing more than a colourful energy bubble that surrounds them. Aura hues are not permanent in general. They fluctuate, change, and evolve over time. Many people's auras, on the other hand, frequently have a prominent colour that stays with them throughout their lives and can reveal a lot about their personalities. It's crucial to understand what aura colours imply and what they represent if you want to use aura to examine your strengths, weaknesses, and more. In this concise blog, I will discuss one of the most prominent auras in detail.

What Does It Mean To Have A Pink Aura?

Pink is thought to have originated from feelings of love, sensitivity, and loyalty. As a result, it is associated with a playful and feminine demeanour. The hue pink is associated with the first Chakra, often known as the root or foundation chakra. Pink aura colour meaning comprises energy, passion, security, and a strong will to live. Kindness, compassion, and care are also associated with the colour pink. Although the aura pink colour is comparable to red, the former is more spiritually minded and holy. What is a pink aura, exactly? I hope you now have a firm grasp on the meaning of pink aura. Let us now look at how the pink aura connotation relates to the individual.

Auras with pink hues are uncommon. In most cases, only children are affected. The reason for this is that the pink aura colour represents a certain level of innocence. Pink aura people are calm and collected. They understand how to strike the ideal balance between consumerism and spirituality in their life. It is thought that they mirror the Universe's fairy energy. These gentle people are extremely sensitive to their own and others' emotions because of their sensitivity and compassion. Natural curiosity and a strong desire to love are represented by the pink energy aura. As a result, its inhabitants speak openly and are conscious of their moral ideals. Being a native of the pink aura, however, this is not the case.

Types of Pink Aura Colors and Meaning Behind Them

The presence of a delicate and light hue aura indicates that you are not easily influenced by materialistic possessions and ambitions. As a result, the significance of the baby pink aura is associated to calmness and light. Spiritual practises are highly important to those with a baby pink aura. Most people are fascinated about all psychic abilities that can assist them in developing some of them in order to follow the road of enlightenment. However, they can become so absorbed in spiritual practises that they lose control of other people and elements of their lives. While it is beneficial to be less concerned with physical issues, you should also maintain contact with the people and society around you.

A loyal, fair, sensitive, and loving personality is represented by a pale pink aura. Its inhabitants, often more than anybody else, are peaceful and mild-mannered. It is nearly impossible to find a pure bright pink aura. Most light pink auras include red or blue particles in them. As a result, the effects of the light pink aura differ from person to person.

Aura of Magenta or Deep Pink

The deep pink aura, also known as the Magenta aura, is the last variety of the pink aura. The aura pink colour with Magenta shade indicates an individual who is a little on the wild side because it is a blend of red and blue. Those with a magenta aura are eccentric and brave, and they are not afraid to get their hands dirty for a good cause. The pink hue aura interpretation tells volumes about their creative and independent nature.

What is Gold Aura - Color Meaning, Personality and Effects