Sun Enters Leo On 16th August, Know Which Sign Will Be Auspicious 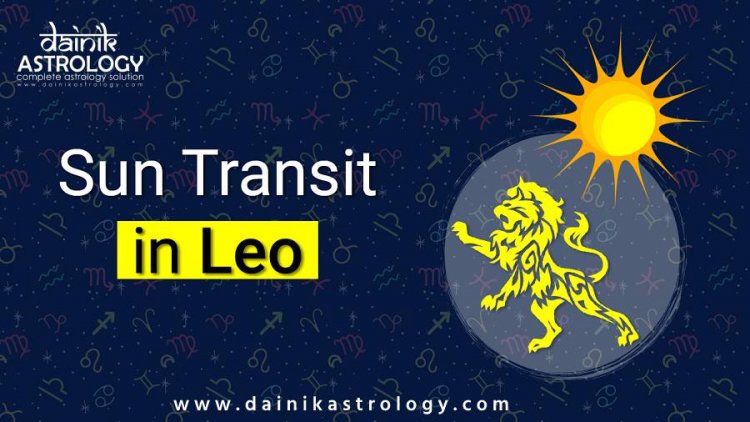 Surya Dev is entering his own zodiac sign Leo at 1:14 pm on the midnight of 16th August after ending the journey of Cancer. According to world famous astrologer in the early times, he had the possession of all the twelve zodiac signs, but, in the course of time, he kept only Leo with himself by giving Cancer zodiac to the Moon and two signs each to the other planets.

The effect of Sun will be very mixed while transiting in the fourth happiness house from the zodiac. Due to some reason, you may have to face family discord and mental disturbance. Chances of getting unpleasant news from friends and relatives also. Travel carefully. Protect items from being stolen. Your own people will try to humiliate you.

Transiting in the third mighty house from the zodiac, the influence of the Sun will increase your courage and might. With the help of your energy power, you will be able to control even difficult situations easily. Your decision taken will be appreciated. Keep the plans confidential and do not make them public until they are completed. Do not allow differences to grow with senior family members and brothers.

The effect of Sun will strengthen the financial side while transiting from the zodiac to the second wealth house. The money given is also expected to be returned. On the strength of your speech skills, you will be able to handle the deteriorating situation. Work related to property will be completed. The awaited works will be disposed of in the departments of the Central or State Government.

Transiting in its own zodiac, the influence of the Sun will bring great success to you. Respect will increase. Chances of getting promotion and new contract in job. There will also be a deep interest towards religion and spirituality, talks related to marriage will be successful. If you are looking to apply for a job in any kind of government organization, then the opportunity is favorable. The responsibility of the child will be fulfilled. For the newly married couple, there is also the possibility of getting a child and procreation.

The effect of Sun cannot be said to be very good while transiting in the loss house in the twelfth from the zodiac. There will be a lot of running away and financial constraints will have to be faced. There will also be a sum of painful journeys to distant countries. Pay more attention to health. Indications of the decision coming in your favor in court cases.

The effect of Sun is no less than a boon for you while transiting in the eleventh house from the zodiac. If anyone wants to start the biggest work or sign a new contract, then the opportunity will be favorable from that point of view too. The economic side will be stronger. Children related worries can be disturbing. Do not allow differences to arise with senior members of the family and elder brothers. Time will be more favorable for the students and the students appearing in the competition.

The Sun will play a very influential role while transiting from the zodiac to the tenth karmic house. There will be increase in job promotion and respect and social responsibilities will increase. If you want to apply for any kind of tender in government departments, then the opportunity will be favorable.

Transiting in the ninth house of fortune from the zodiac, the influence of the Sun will give immense progress towards religion and spirituality, it is also possible that you may have an interview with your favorite. Not only will there be luck, promotion in job and chances of getting new contracts. Indications of the decision coming in your favor in court cases. You will get the benefit of travel and country.

The effect of Sun will be very mixed while transiting from the zodiac to the eighth house. Respect and social status will increase, but your own people will continue to conspire, so it is better to stay away from disputes. Cases related to courts should also be resolved among themselves. Be reflective about your health. Avoid reaction with fire, poison and drugs. Matters related to real estate will be settled. Don't make your strategy public until you've finished it.

The effect of Sun will be very mixed while transiting in your own house in the seventh house from the zodiac. There may be bitterness in married life. There will be some delay in marriage related talks. Time will be favorable for the business class. Avoid doing business in common.

Transiting in the sixth enemy house from the zodiac, the effect of the Sun is not less than a boon for you, so you can achieve as much success as you want. Time will also be very favorable from the point of view of business. Even if you are looking to sign a new contract, the opportunity will be favorable. Avoid loan transactions during this period.