The reason why your Marriage proposal gets rejected 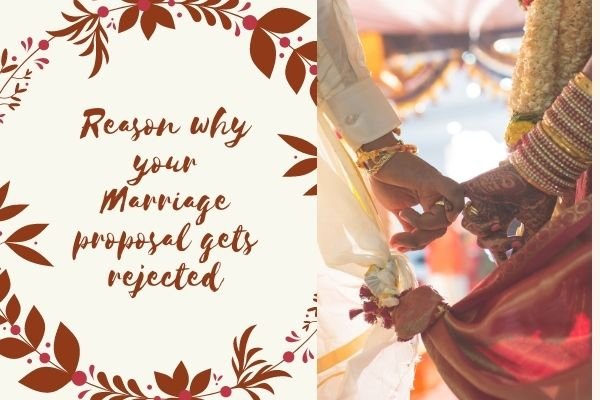 Reason why your Marriage proposal gets rejected

What exactly is a marriage proposal, and why is it so significant?

For most individuals, marriage is meaningful because it represents the uniting of two souls in love. It's a once-in-a-lifetime decision and the joining of two individuals to become one, a beautiful. If your spouse is genuinely dedicated to you and your relationship, he or she will propose to you.

But what if the most anticipated event proves to be a nightmare? Rejected offers do occur, and they are not simply forgotten.

Reasons for rejection of marriage offers

Whether you are asking the question of receiving the proposal, read on to better understand why some individuals choose to say no to a lovely question. The following are ten of the most typical causes for unsuccessful marriage proposals.

You aren't quite prepared yet.

You may be in love and happy, but you aren't always ready to say "yes" and go on to the next level. In certain circumstances, the rejection of a marriage proposal does not imply that the other person is uninterested in the relationship. It might just indicate that they are not yet ready.

They may still have a lot of aspirations for their work and single life, and marriage isn't even on their radar. Some people just do not want to establish unrealistic expectations and will deny a marriage proposal.

You require more time to consider.

A rejected proposal does not necessarily imply a rejected love. While marriage proposals are typically delightful surprises, there are times when the individual is taken off guard.

If you haven't discussed the future of your marriage before asking the question, it's reasonable if your partner says no. Nobody likes being taken off guard, especially when it comes to their future. Your companion may require some time to consider the matter.

Your relationship is not "the one."

The most prevalent cause for marriage proposal rejection is uncertainty. Some people don't mind dating or being in a relationship. Regrettably, they do not perceive themselves as wedded to the person they are with. Marriage is a lifelong commitment, therefore if they don't view you as a lifelong partner, the answer is always 'no.' This might be the most painful reason for a marriage rejection.

You aren't yet financially secure.

When a person's financial situation is not yet stable, he or she may opt to decline marriage proposals.

Getting engaged and finally married involves financial responsibility for them.

This is a huge step in your relationship, and it might be daunting to commit when you don't have a steady job or a source of cash.

Some people would rather focus on their jobs before settling down. They would love marriage and having a family more this way.

You are not a believer in marriage.

Some people who have rejected down marriage proposals are skeptical about marriage in general. They may believe that the ceremony is unimportant, or they may have had a terrible occurrence that stops them from believing in the sacredness of marriage. Those in this scenario may opt to compromise to remain together without marrying.

There was no ring

The proposal was just intended to save the relationship.

What happens when someone rejects it?

You've met 'the one,' and you've decided to pop the question, but what happens if your marriage proposal is turned down?

What will happen now?

A person may deny a romantic marriage proposal for a variety of reasons, including the stated above. Being confronted with the truth that you and your partner do not share the same desire of marrying and starting a family may lead to the end of your relationship.

Of course, it's natural to be upset. Rejection is never easy, and it's not something you can get over in a day or two. This is also the point at which you must determine if you want to stay in the relationship or end it and move on. In any case, you'll need expert advice on how to deal with a rejected marriage proposal. These four phases might assist you in determining how to proceed.

We don't want to live our lives regretting our choices. We want to be as certain as possible about something before we decide to pursue it. Doesn't that make sense?

That's why, even if it's the most romantic marriage proposal you've ever received, it's perfectly OK to deny it.

6 Major Mistakes That Leads to a Boring Relationship