Know the importance of Kalash Pujan 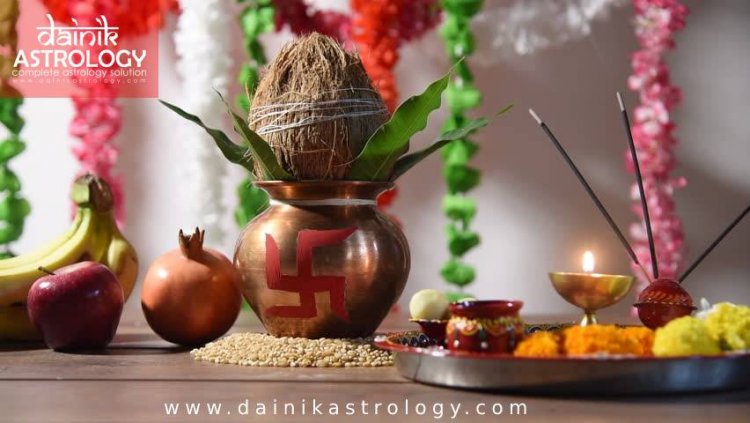 Know the importance of Kalash Pujan

This urn is considered to be a symbol of the world universe, the vast Brahma and the earth-pind i.e. globe. All the gods are contained in it. During the worship, the Kalash is established as a symbol of the power of the deities, places of pilgrimage etc.

Vishnu resides in the mouth of the Kalash, Rudra in the throat and Brahma in the root, and in the middle of the Kalash reside the divine Mother Shaktis. If you want to know more en consult world famous astrologer.

Holy water filled in the Kalash is a sign that our mind should always remain cool, clean and pure like water. May our mind be filled with faith, fluidity, compassion and simplicity. Always stay away from these evil feelings like anger, greed, attachment, jealousy and hatred.

The swastika symbol placed on the Kalash symbolizes the four ages. It symbolizes our 4 stages, namely childhood, youth, adulthood and old age.

For this reason, milk, water, betel leaves, amrapatra, saffron, akshat, kumkum, durva-kush, betel nut, flowers, cotton, coconut, grains etc. are kept in the urn for worship. It is considered a messenger of peace.

1. The pot of nectar: ​​This Mangal-Kalash is also a symbol of the churning of the ocean. The literal meaning of the Kalash symbolizing happiness and prosperity is - a pitcher. Water is considered sacred in Hinduism. Therefore, it is kept in the house of worship. This makes the worship successful. This Kalash is made in the same way as the nectar was extracted by churning Madaranchal during Amrit Manthan. Like the coconut with the hairs is the Madaranchal mountain. The Kalash is the time of Vishnu and the water filled in it is like Kshirsagar. The yarn tied on it is Vasuki Nag from which the churn was done. The yajaman and the priest are like suras and asuras or to say they are churners. A similar mantra is recited at the time of worship.

3. The atmosphere remains pure and positive: It is said that the Mangal Kalash is filled with water in a copper vessel, which generates electromagnetic energy. Coconut is also filling with water. The combination of both creates an atmosphere like cosmic energy which makes the atmosphere divine. The raw yarn that is tied in it binds the energy and forms a circular ring. In this way, it creates a kind of positive and calming energy which gradually pervades the entire house.