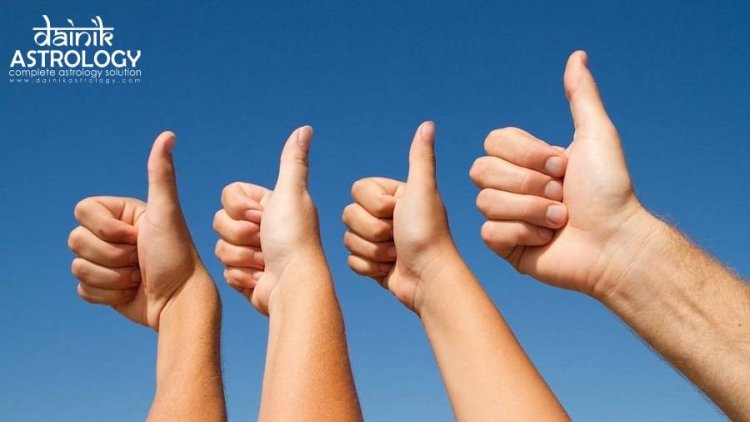 1. According to astrology prediction of love, if the thumb of a man's hand is unformed or clumsy, then he will get less pleasure of his wife. He will have to face difficulties in keeping up with his wife.

2. If the thumb of a man's hand is very beautiful and attractive, then he will have a rapport with his wife and both will earn success by cooperation with each other.

3. According to world famous astrologer, if the thumb is tilted outward, the person will be of weak brain and wasted.

4. If the thumb remains straight, it is believed that the person is strong about his thoughts. Natives with strong thumbs are firm and stable in nature. They do not take immediate decisions, but they take decisions consciously and stick to it. They do not easily establish friendship.

5. Jataka with flexible thumb is open heart of soft nature. They are unable to live up to any decision. Repeated decisions change. They easily befriend strangers. Due to this many times they have to face deception.

6. The upper part of the mace shaped thumb is wide and puffy. Such people are violent and extremely angry.

7. Single thumbs have a thin waist ie the middle is thinner. Such natives are clever and proficient in diplomacy.

8. Straight thumbs are similar from bottom to top. Such natives are of direct nature. They complete their work on the basis of logic and deliberation.

10. The people who have a greater angle between their index finger and thumb are soft-hearted, scholarly, artist and artistic but they are fortunate, suspicious and religious. The natives of right angles are obstinate. They have a feeling of vengeance. The natives with low angle thumbs are pessimistic, lazy and indulged in debts due to addictions.

11. The first porua of the thumb is a sign of will. The second porua shows rationality and the third porua shows courtship. A person whose thumb has a first porua is larger than the second pooja has strong will power. The native who has the second porua of the thumb and the first is relatively small, has strong reasoning. The person whose first and second poles are equal, they are going to lead a successful life. They have equal power of reason and will. The third part of the thumb is the mountain of Venus, not Porua. It is definitely larger than the first or second breeds. If it is beautiful and red-colored, then the person grows up in love. They are willing to sacrifice in love. Their married life remains enjoyable. If this area is suppressed then individuals are pessimistic.

Do you know the amazing facts related to Pushya Nakshatra?