Jupiter Will Move in Reverse, What Will Happen To 12 Zodiac Signs till October 18 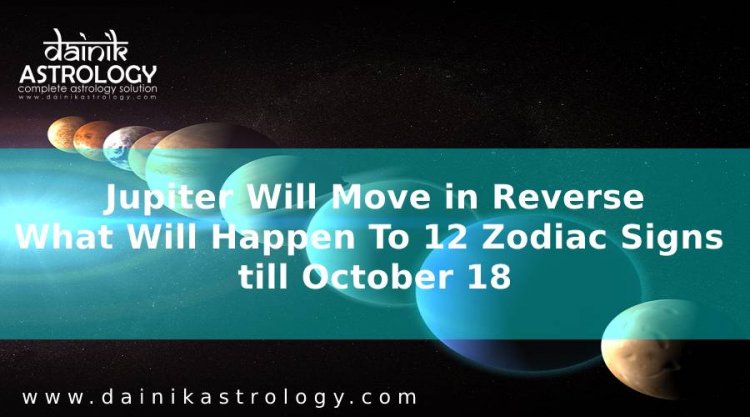 Jupiter Will Move in Reverse, What Will Happen To 12 Zodiac Signs till October 18

From the tenth day of Shukla Paksha of Jyeshtha month i.e. 20th June 2021, from the day of Ganga Dussehra, Jupiter will start moving in retrograde motion in Aquarius and will move again after 120 days on 18th October 2021. However, in retrograde state for some time in between, on September 14, Jupiter i.e. Jupiter will start transiting in Capricorn and Margi will also be in the same sign where Saturn is already sitting. After some time, on November 21, Guru will again start traveling in Aquarius. Let us know what will be the effect of retrograde Jupiter on 12 zodiac signs.

1. Aries- Jupiter will remain in the 11th house in Aries, which is the house of profit. Aries will benefit in career, job, promotion and business, but people of this zodiac should avoid investing or lending.

2. Taurus- It is transiting in the tenth house in Taurus, which is the house of karma. There will be struggle for career, name and fame. However, there will be benefits in the workplace.

3. Gemini- Jupiter will transit retrograde in the ninth house of Gemini. It would have been the spirit of religion, spirituality and destiny. In such a situation, if you stay in the shelter of religion, you will get benefits, otherwise you will have to work hard. Apart from this, do not dispute with the father.

5. Leo- There will be retrograde Jupiter in the seventh house of Leo zodiac, which can cause trouble in married life, but there will be success in marriage related matters and there is a possibility of profit in business, increase in property.

6. Virgo- In Virgo, retrograde is transiting in the sixth house. There will be a negative effect on health and married life but not in the workplace. Still you have to take care. Will need to work very hard.

7. Libra- Jupiter is transiting retrograde in the fifth house of Libra. The fifth house is the main house of children, education and career. There may be problems in married life. Do not take investment risk.

8. Scorpio- Scorpio is transiting in the fourth house, which is the house of happiness. The people of Scorpio zodiac will also benefit from the yoga and travel of progress in the field.

9. Sagittarius- Jupiter is transiting in the third house of Sagittarius. It is the spirit of might, siblings, neighbor and travel. Sagittarius will also get an increase in profits and comforts in business. However, there may be a rift in the relationship. Don't travel in vain.

10. Capricorn- Jupiter will move retrograde in the second house of Capricorn. Avoid unnecessary expenses. Lifestyle changes can happen. Keep restraint on speech and do not dispute with in-laws.

11. Aquarius- Jupiter is retrograde in Aquarius itself. That is, transiting in the first house. You may have health problems during this retrograde transit of Jupiter. You should avoid being deceived. You can win only by your good qualities.

12. Pisces- Jupiter is transiting in the 12th house of Pisces. With this, the people of Pisces will get the support of luck. There will be progress in stalled work and stalled money. However, do not travel in vain otherwise there will be loss.