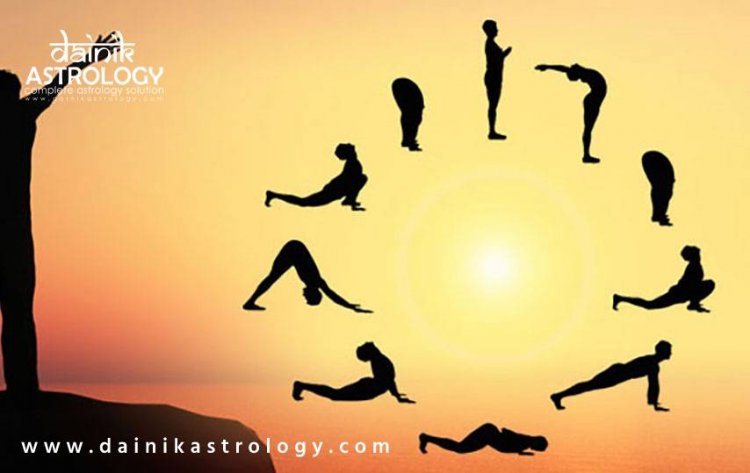 Surya Namaskar is practiced in these 12 positions, let's know-

(1) Stand straight with both hands folded. close your eyes. By concentrating on the 'Agya Chakra', invoke the 'Sun God' through the mantra 'Om Mitraya Namah'.

(2) While inhaling, stretch both the hands up close to the ears and bend the arms and neck backwards. Concentrate on the 'Vishuddhi Chakra' at the back of the neck. By consulting world famous astrologer you can get solution.

(3) In the third position, while exhaling slowly, bend forward. Hands with the neck, going down adjacent to the ears, touch the earth on the right and left of the feet. Keep knees straight. Stay in this position for a few moments while concentrating on the 'Manipuraka Chakra' behind the navel while the forehead touches the knees. Do not do sadhaks with defects of the waist and spine.

(4) In this position, while inhaling, move the left leg backwards. Pull the chest forward and stretch it. Tilt the neck more backward. Leg stretched straight back and toe raised. Stay in this position for some time. Take the meditation to 'Swadhisthana' or 'Vishuddhi Chakra'. Keep your face normal.

(5) While exhaling the breath slowly, take the right leg back as well. The heels of both the feet should meet each other. Stretch the body backwards and try to match the ankles to the earth. Raise the buttocks as high as possible. Tilt the neck down and place the chin in the groin. Practice focusing on the 'Sahasrara Chakra'.

(6) While inhaling, make the body parallel to the earth, prostrate straight and first put the knees, chest and forehead on the earth. Raise the buttocks slightly. Breathe out. Focus your attention on the 'Anahata Chakra'. Normalize breathing rate.

(7) In this position, while slowly filling the breath, straighten the hands while pulling the chest forward. Move the neck backward. Keep the knees touching the earth and the toes of the feet standing. Pulling the mooladhara and fix the meditation there.

(8) This position - same as the fifth position

(9) This position - same as the fourth position

(10) This position - similar to the third position

(11) This situation - similar to the second situation

(12) This position will remain as in the first position.

The above twelve positions of Surya Namaskar make our body healthy by removing the deformities of all the organs. This whole process is highly beneficial. By removing the pain of the hands and feet of its practitioner, they get strength. The muscles of the neck, lungs and ribs become strong, the body becomes lighter by reducing the excess body fat.

4 Things Become Reason For Quarrel Between Husband And Wife

Increases love and strengthens the relationship with your...