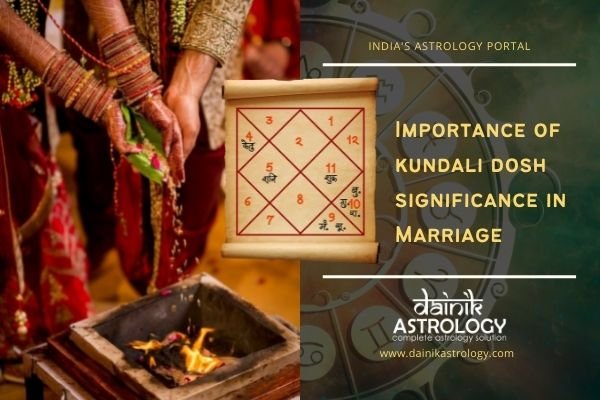 Marrying someone else may be a challenge for most people since it forces you to merge your life and goals with theirs. It may be tough to cope with marital difficulties after the birth of a child or other major life events, resulting in bitterness and disappointment. Regardless of one's circumstances, each individual is born with a predetermined path. The placements of various planets in their horoscope dictate their one-of-a-kind destiny. Astrology's Janam Kundali (or birth chart) has several Kundli doshas that aren't immediately apparent. According to the horoscope, the compatibility between two people is based on their birthdays.

Consult a Kundali Dosh Nivaran since certain doshas might be dangerous. Doshas in your kundli do not always mean that your marriage will fail; it all depends on your own horoscope. Even though astrological matching may not appear practical, it may be used to identify any Kundli Milan doshas that exist. Astrology consultancy,  along with many other methods, may give insight into a person's personality and, as a consequence, help them make mature judgments.

Couples may get an accurate image of their future together by using horoscope matching to learn about their potential partner's qualities and traits. So, if you're not sure who to marry, Kundli matching might be an excellent option. The Kundli dosh is the most important factor to consider when evaluating a couple's potential marital compatibility. The effects of Kundli Dosh on married couples may be significant and last for a long time. Therefore, it is imperative that people avoid being married to people they don't like.

The first step in the process of matching kundlis is to compare the 36 characteristics of the prospective bride and groom. At least 18 aspects of each kundli should coincide, according to astrological predictions. Can Kundali matching, in conjunction with other astrological traits, foretell if they'll have a happy and peaceful married life?

Kundli dosh refers to severe compatibility issues between the two persons who want to be married. With Kundali Dosh remedies, many best astrologers feel that these couples may have a happy marriage and profit from it.

Dosha of Mangal Mangal dosh is a common occurrence in horoscopes and a major cause for worry while dealing with the myriad of Kundli dosh issues. It moves from high to low based on Mars's location at any given time. This might be influenced by the relative positions of other planets and the way they affect Mars's orbit. As a result of this dosha, there might be delays in getting married, a harsh marital life and even divorce, as well as numerous family disagreements.

The Nadi Dosha, also known as the Nadi Dosha, may be found in both of the couples' Kundlis, if astrological readings are performed on the Kundlis. This situation may have an effect on the compatibility of a couple's marriage. An unhappy marriage or a very tough romantic connection is predicted by the presence of this dosh.

NadiNivarana Puja is a very successful Nadi Dosha therapy. An skilled astrologer should carry out this task.. Taking money irresponsibly might be risky, thus seeking the advice of an astrologer should never be a concern. When this dosh is affecting your horoscope, you may aid it by donating food and money to the needy.

There should be no Bhakut Kundli dosh during marriage chances. Dosh may have a substantial influence on a couple's ability to produce children, either by making them infertile or lowering the likelihood of having children in the family. Bhakut dosh may have a long-lasting effect on a marriage. Financial well-being, marital contentment, and longevity are all factors that this dosha may influence.

An accurate prediction of the future may be made using Kundli Milan, which has several benefits and is quite reliable. In today's contemporary culture, there are several examples of late marriages, love marriages, inter-caste Marriage , or even inter-race marriages.

25 things you should never do to keep a relationship going