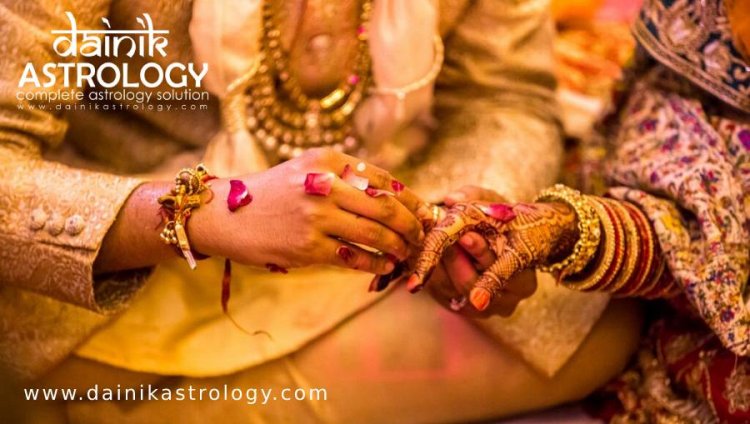 According to the Yoga given in the horoscope, the idea of ​​marriage is mainly done with the seventh house. Apart from marriage, other things related to marital life, mutual relations of husband and wife, bonding, strengthening of relationships etc. are contemplated by this sentiment.

If you are not married then do these 20 ways:

1) Married young men and women who are not able to get married, should stay in a room located in the north or north-west direction. This leads to relationships for marriage. They should always keep their head in the east direction while sleeping in that room.

2) On Thursday, a marriageable girl should be wrapped under a pillow in a yellow cloth wrapped with turmeric.

3) If the boy or girl offer water to the root of Peepal for 13 consecutive days, then the problems related to marriage are removed.

4) The young woman whose marriage is facing hurdles, she should sleep in the aerial direction of the house.

5) Unmarried boy / girl should not live in a room where unfinished work is done, ie the paint, repair etc. of the room is unfinished or in the room where the beam appears to be hanging.

6) Sometimes it happens that no young man or woman agrees to the wedding, then keep the crystal ball in the glass plate on the north side of their room.

7) The color of the room, bedroom and door should be of pink, light yellow or bright white color for the eligible young men and women who are not getting married. This will change the situation.

8) Apart from this, they should keep a water fountain in the northeast direction in their room.

9) Unmarried girls fast for Thursday for early marriage and it is also helpful for post marriage husband wife problem solution.

10) Along with fasting on Thursday, sit under a banana tree and chant a garland of recitation of Jupiter Mantra.

11) If Mars is situated in the first, fourth, seventh, twelfth place in the horoscope, then the native has Mangli yoga. Due to this yoga, there are problems in marriage delays, differences in couples after marriage, debates and so on.

12) To avoid this, a Mangli youth or a girl should fast on Tuesday.

13) Chant Mangal Mantra and get married.

14) Even if Saturn is placed in the seventh house, there are problems in marriage.

15) For this, chant the mantra Shanashirai Nam: or you can consult a famous astrologer for more guidance.

17) It is best to read the Balakand for the attainment of the eligible groom.

19) Parents who think that their daughter-in-law is beautiful and intelligent, then on Thursday and Sunday, cut the nails of the son and burn them on the stove in the kitchen.

20) After the daughter is married, put Gangajal, a little turmeric and a coin in a lotus at the time of farewell, rotate it over the daughter's head seven times and throw it in front of her. Her married life will be happy.

Change of Jupiter in April, Destiny of These Zodiac Signs Will Change

Astrological remedies to be successful in love

7 Most Romantic Zodiac Signs that brings Happiness in Love...

Make Your Relationship Even Better with Surefire Tips

How to deal with the changing nature of the husband?