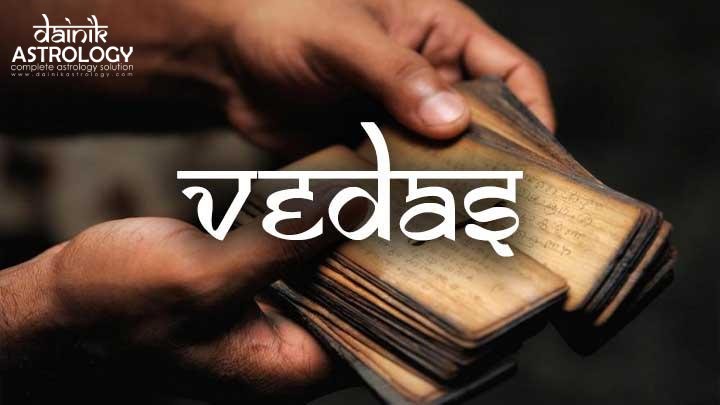 Science is standing on the first place to reach the bottom of things, information related to them is already available in Indian texts. The Vedas, considered the voice of the gods, can be considered as examples. Vedas are also ancient and basic scriptures of Hinduism. Some old scripts of the Vedas are today considered as world heritage. The recognition of mantras mentioned in the Vedas remains intact even today.

What is the Vedas?

By the way, it is well known what the Vedas are? The Vedas are believed to be the knowledge of God, whose revelation took place in the heart of the saintly ascetics (sages). If we talk about the literal meaning, then the word Veda originated from the Sanskrit language. Vid means to know means knowledge. Vedas are considered to be the ancient sacred texts of Hinduism. Vedic era, Vedic culture etc. are made from Vedas. It is believed that in ancient times, God had indirectly recited Ved mantras to sages. For this reason the Vedas have also been called Shruti. It is also said in Manusmriti

In the Vedic era, the divine God gave great wisdom to the spiritual men absorbed in the Samadhi for the spiritual upliftment of the world. Because they heard this knowledge provided by God, hence it is also called Shruti.

The Vedas have also been called eternal. Shruti Bhagavati tells 'Ananta va Veda:' That is, those who are infinite are the Vedas. Veda means there is no limit to knowledge and knowledge is infinite, therefore Vedas are also infinite.

How many types of Vedas are there?

It is believed that initially the Vedas were the same, although in many religious texts, their number has been considered as four from the beginning. According to the belief of Mundakopanishad, these are the four Vedas, the Rigveda, Yajurveda, Samveda, Atharvaveda.

How did the Vedas expand?

The Vedas proceed under the Guru Shishya tradition. In the beginning, the Mahatmas whom the Mahatmas had given this great knowledge for the welfare of the world, spread this knowledge to their disciples and then generation after generation. In this way, the tradition of Vedas education is believed to be in practice for four-five thousand years. It is believed that in the initial stage the Veda was only one, which had many verses. These were called Veda-sutras. Among these are several verses and mantras related to sacrificial rituals, lyrical positions, and public welfare. The Vedas are believed to be the same till Satyuga and Treta but in Dwaparyuga, Maharishi Krishnadvapayana divided the Vedas into four parts. In Sanskrit, the department is also called Vyasa, because of the diameter of the Vedas, it is called Krishnadvapayana Ved Vyas. Pael, Vaishampayan, Jaimini and Sumantu were the disciples of Vedavyas. He taught the four disciples to the four Vedas. Paal gave knowledge of Yajurveda to Rigveda and Vaishampayan. Samaveda to Jaimini and Sumantu to Atharvaveda. After this, the education of the Vedas continued from the front.

The Veda and the Vedas

About one lakh mantras are considered in Vedas. In which 4 thousand knowledge scandal, 16 thousand worship method, 80 thousand ritualistic subjects. The interpretation of mantras by which a Brahmin is called. Each Veda has a Brahmin scripture. The Brahmin text of the Rigveda is Aitareya, Yaturveda's Shatapatha, Samveda's Panchavinsha and Atharvaveda's Gopath Brahmin.

Similarly there is a Upaveda of every Veda. Ayurveda of the Rigveda, Dhanurveda of Yajurveda, Gandharveda of Samaveda, Arthashastra of Atharva Veda. Education, kalpa, grammar, nirukta, verses, and astrology. These six scriptures are considered parts of the Veda. The appendages of the Vedas are also called conspiracy or pedagogy. Astrology is one of the six parts of the Vedas. Through astrology, you can solve the tricky problems of your life, get guidance.

What are the benefits when a mantra is proved?

Why you should read Panchang? Know the benefits of reading...