Fate of Love and Marriage in numbers 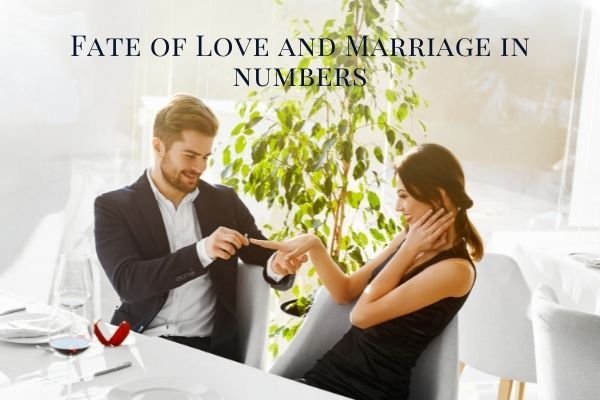 Fate of Love and Marriage in numbers

Individuals who desire to marry are frequently curious as to whether the marriage will be arranged or loved. The prospect of a late marriage frequently concerns the parents of marriageable-age girls. If a person is born or has a destiny number of 5, 6, or 7, they are more likely to marry for love. These people can defy their parents and society's desires by marrying the person of their choice. Even if only one spouse has such a combination, love marriage can be legally recognized. There is a chance of late marriage if a birth date has a pattern of 3, 6, 8, and 9.

These people value their freedom far too much, and even if they marry, it will be tough to limit them. The presence of more than one 8 makes the individual career-focused and disrupts the smooth operation of a partnership.

Marriage forecast for those born on first number

Marriage forecast for those born on the first day of the first month of the first year Number one folks are extremely enthusiastic and are not easily swayed. They are practical and would like to learn more about the person before making a decision. They are frequently spotted marrying childhood buddies. They refuse to compromise and cannot be coerced into falling in love.

Marriage forecast for those born on second number

Numbers 2,4,6 are the greatest combination for them, while 7,8,9 are the worst. They are passionate and sensitive individuals that prioritize their love and family. When it comes to love, marriage, and relationships, they follow their hearts. This also makes individuals prone to hardship in marriage.

Marriage forecast for those born on the third number

People in the third position are highly realistic and self-centered. They love themselves more than anybody else, which is why they want to control their spouses. They are not particularly romantic and, in general, do not make judgments about love and marriage based on their intuition. They are ambitious people who prefer to be at the top, and this shows in their connection. The greatest combination for them is 2,6,9, while the worst is 1.

Marriage forecast for those born on the number 4:

People in the fourth position have more connections outside of marriage for sexual pleasures. This is not true for everyone; those born on the 22nd are more faithful to their spouses. The majority of number four persons are in charge. They stay dedicated to their relationships, which is why their extramarital affairs are kept private.

People in the fourth position are short-tempered, which has an impact on their marital and love life and is a cause of divorce. Numbers 1,2,7,8, and 9 are the greatest combinations for them.

Marriage forecast for those born on number 5

Sex is particularly significant to persons who have the number 5. They are also highly daring in their sexual lives. These folks grow tired quickly and have a lot of relationships before getting married. They are a group of people that are unsure about where they stand. Numbers 5 and 8 are the greatest matches, while number 2 is the worst.

Marriage forecast for those born on the sixth number

Number 6 persons have a pleasant and charismatic personality that attracts the opposite sex. They have connections outside of their marriage, which might lead to tension and separation if they are not emotionally devoted to their partner. This is a love and peace number, thus they need to be emotionally and physically compatible. People with the number 6 are skilled at foreplay and lovemaking. Number 6 persons prefer to get along with people of all numbers, therefore there is no best or worst match for them.

Marriage forecast for persons born on the seventh number

Number 7 individuals are extremely amorous and enjoy surprising their lovers with romantic dates and presents. They desire to be happy in their personal lives to be successful in their professional life. They value calm and do not wish to live a stressful life. For a relationship or marriage to be successful, people must communicate more with their partner and make things plain and honest to minimize stress in their lives. Number 2 is their greatest match, while number 9 is their worst.

Marriage forecast for persons born on the eighth number

People with the number 8 personality have a strong personality, yet they are emotional in their interactions. They are the most devoted of all the numbers and will do anything for their loves. They are frequently misunderstood, and as a result, they frequently suffer in relationships. Number 8 women, in particular, struggle in their marriage. Because of their loyalty, they should aim to marry a number 8 individual. The worst number for an 8 is 2, and they should avoid marital alliances with 2, however, they may be excellent friends with 2.

Marriage forecast for persons born on the ninth number

Number 9 persons are highly dominant and constantly want to control the game. They are also emotional, yet their feelings are sometimes misunderstood by others. For them, sex is the most crucial aspect of every love connection, and everything else follows. They also have extramarital affairs for simply sexual reasons. Sex is the most demanding of all of them. They are concerned about their family. Numbers 2 and 6 are their greatest matches, while numbers 1 and 9 are their worst.

Our date of birth numbers, like our stars, foretell a lot about our future. Parents of marriageable-age girls are frequently concerned about the likelihood of a late marriage. People who are born with or have a destiny number of 5, 6, or 7 are more likely to marry for love. In this post, you will learn about the significance of numbers in love and relationships.