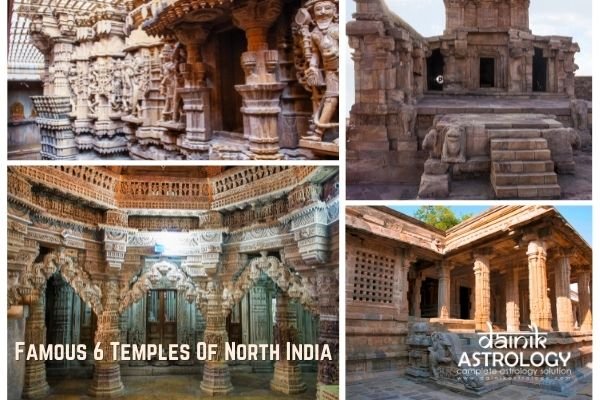 'North India,' the coldest region of the Indian subcontinent, is a must-see for acrobats and explorers. The whole of the area is ideal for such visitors, it also draws thousands of pilgrims each year due to its reputation as a famous sanctuary for many gods and goddesses. Among the well-known temples in North India are Kedarnath (the highest of the 12 Jyotirlingas), Vaishno Devi (one of the famed 51 Shakti Peethas), and Badrinath (one of 108 Divya Desams).

All of the temples have interesting stories to tell, therefore they are all worth seeing. So, if you're planning a vacation to North India, stop by these prominent temples to enhance your spiritual journey.

Badrinath Temple, one of the four Char Dhams, is dedicated to Lord Vishnu and is located on the banks of the Alakananda River. The temple, which attracts devotees from all around, is positioned at an elevation of roughly 10,827 feet above sea level. The holiness of the temple is enhanced by the statue of Lord Vishnu in a contemplative and peaceful position, which is surrounded by 15 black stone idols. Despite being one of India's most important pilgrimage destinations, the temple is only open from May to November due to harsh weather conditions.

Kashmir Amarnath Cave is one of the most famous temples in North India, located at a height of roughly 3888m from Pahalgam. The cave has a Shivling made of ice that perfectly depicts Lord Shiva. The temple has a large influx of worshippers, particularly during the forty-five days of Shravan Mela. The cave may be reached through Pahalgam or Baltal. Although the older approach is quicker, it necessitates moderate to strenuous hiking. So, if you're looking for adventure, take the Baltal route to Amarnath.

Birla Mandir, also known as Lakshmi Narayan Temple, is located at the foot of Jaipur's Moti Dungari hill. Every year, millions of worshippers go to the temple, which is surrounded by lush vegetation and has stunning marble sculptures. The Birla Group of Industries constructed the temple in 1988. Lord Vishnu and Lord Vishnu are worshipped in the temple. The temple's spectacular domes and massive walls, which are carved with poetry by famous poets, add to its splendour. The temple comes to life at night, when it is illuminated by thousands of lights. The notion that all religions are equal, symbolised by the three domes, makes it one of the top temples to visit in North India.

Vaishno Devi, located at an elevation of 5,200 feet above sea level in the Himalayan slopes of Trikuta, is one of the most prominent temples in North India devoted to the Dev Shakti. The temple is one of the 51 Shakti Peethas and has three rock heads known as 'Pindkas or Pindis.' Worshippers must hike 13-14 kilometres from Katra's base camp to reach the temple. There are horses and palanquins available for those who do not want to walk to the temple or have medical difficulties. Although hiking appears to be difficult, the enjoyment along the route is limitless. You may take as many breaks as you wish and stop at food outlets to refuel with snacks and beverages.

The Golden Temple in Amritsar is unquestionably one of the most famous temples in North India, with its distinctive Sikh style. The temple preaches equality and modesty while being built at a lower level than the surrounding countryside. Furthermore, the temple's four doors from all sides indicate that individuals of all religions, castes, creeds, and genders are welcome. There are various activities you may engage in to heal your mind, body, and spirit, ranging from lying down beside the lake at night to volunteering in the kitchen.

Mansa Devi Temple is one of the most popular temples in North India, sprawling over 100 acres in the Shivalik mountains. Maharaja Gopal built the temple in the 19th century, and it is adorned with 38 panels of murals. The flower decorations on the ceiling and walk are very charming. You may visit nearby pilgrim sites like Vaishno Devi Temple, Daksh Mahadev Temple, Gau Ghat, Chandi Devi Temple, and others while visiting Mansa Devi Temple. Come here during Navratri or the Kumbh Mela if you want to see the temple at its finest.

Harkipodi is located near Krishna Dham at Kharkhari, Haridwar, Uttarakhand 249401.

6 Major Mistakes That Leads to a Boring Relationship

Significance and Importance of Forgiveness in Marriage

25 things you should never do to keep a relationship going