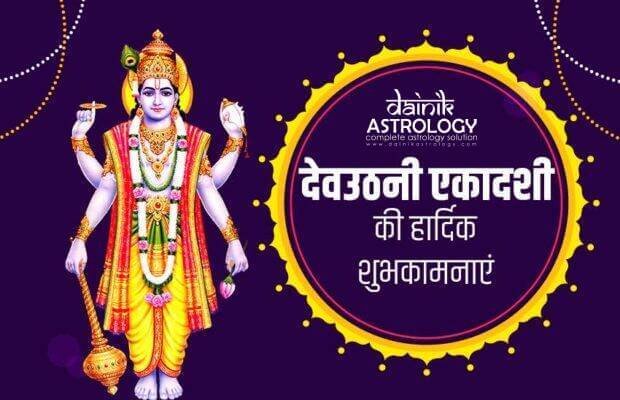 Ekadashi of the Shukla Paksha of Kartik month is called Dev uthani ekadashi 2020. This time Devauthani Ekadashi is on Wednesday, 25 November. According to the beliefs of Hinduism, Lord Vishnu sleeps for four months on Ashada Shukla Ekadashi and wakes up on Kartik Shukla Ekadashi. On the day of Devuthani Ekadashi, Chaturmas comes to an end and the marriage process begins. God will be awakened on the Ekadashi date of Shukla Paksha of Kartik month i.e. November 25 with a special puja recitation. This day is called Dev Prabodhini Ekadashi. Manglik works will begin from this day after the awakening of Lord Vishnu.

According to astrology consultancy, Lord Vishnu had asked for three feet of land to be donated to King Bali in the Vamana avatar. God covered the whole earth, sky, and all directions in the first step. Took heaven folk in the next step. In the third step, Bali sacrificed himself and asked to be kept on the head. In this way, pleased with the donation, God made Bali the king of Hades and asked for a bride.

Bali asked for a bridesmaid that God may reside in my palace. Seeing her devotion to the sacrifice, God gave her the boon to stay in her palace for four months. According to religious belief, Lord Vishnu resides in the Palace of Bali at Patala from Devashyani Ekadashi to Devprabodhini Ekadashi. For more information, you can consult our world-famous astrologer.

Shaligram-Tusli marriage the next day

Lord Shaligram has been praised in the Kartik Mahatmya of Skandpuran and it has been said that all the pilgrimage results from its philosophy. Every year on the Dwadashi of Kartik month, women get Tulsi and Lord Shaligram married (Tulsi shaligram vivah) as a symbol. This year, Shaligram and Tulsi will be married on Thursday, 26 November. Only then the followers of Hinduism start auspicious work like marriage etc.

Why did Lord Vishnu marry Tulsi?

Vrinda, the wife of a demon named Shankhchud, was extremely Sati. It was impossible to defeat Shankhchud without dissolving his sattva. Sri Hari changed the form of Vrinda by disguising the form of deceit and then Shiva killed Shankhchud. Vrinda cursed Shree Hari to be transformed into Shila form for this deception. Since then, Shri Hari has also lived in Shila form and is called Shaligram.

She was reborn as Tulsi in the next life. Shri Hari had blessed Vrinda that without Tulsi party, his worship would never be complete. Just as Shivalinga is worshiped as the Deity of Lord Shiva. Similarly, Shaligram is worshiped as the Deity of Lord Vishnu. Shaligram is a round black colored stone found at the bottom of the Gandaki River in Nepal. There is a hole in it and inside the stone are conch, chakra, mace or padma carved.

What is the importance of worship of Shaligram?

According to Shrimad Devi Bhagwat, a person who offers a Tulsi letter to Lord Vishnu in the month of Kartik. The donation of 10,000 cows definitely fetches fruit. Anyway, daily worship of Shaligram changes the fate and life. Worshiping Shaligram methodically does not disturb any disease and planetary obstruction. In any house in which Shaligram lives with Tulsidal, Conch and Shivling, there is prosperity.

Margashirsha Month: Know the importance of this month

Dainik astrology is providing daily horoscope so you can able to check out how your...

Our ancestors have recognized the importance of the five components of the universe...

We are providing daily horoscope so you can able to know how your day will be gone,...

Vastu Shastra is a sacred text that reveals the divine science called Vastu, which...

Marriage is a sacred bond of two natives that lasts a lifetime. Keeping this in...

It is a commonly known fact that Radha and Krishna are considered incomplete without...

The occasion of Bhai Dooj is celebrated with zeal and enthusiasm. The day signifies...

Astrology was regarded as a secret knowledge known only to a small group of people....