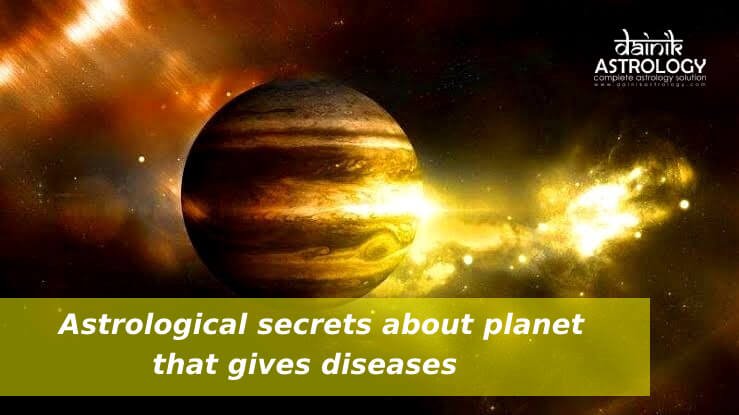 Our world famous astrologer, who believe in astrology, believe that according to astrology, a person's body is also operated according to planets. Sun eyes, Moon mind, Mars blood circulation, Mercury heart, Jupiter intelligence, Venus is the lord of each rasa and Saturn, Rahu, and Ketu are udders.

If Shani is strong then there is a special benefit in job and business. Household life goes on smoothly. But if Saturn is wrathful, then the person gets angry at talk. Decision power does not work, there is discord in household and destruction in business.

Surya: Surya is the life-giver of the Earth, but a cruel planet, he accelerates human nature. When this planet is weak, headaches, eye diseases and typhoid etc. diseases occur. But if the Sun is in a higher zodiac sign then it gives power, substance and splendor. If wrong effects of the sun are coming out, then fasting and rubbing of ruby ​​reddish Tamra or Mahsuuri can be done on the day of Sun i.e. Sunday.

In order to suit the Sun, the mantra - 'Hama Homa S: Surya Namah' should be chanted one lakh 47 thousand times. This lesson can be completed little by little over several days.

Moon: Moon is an auspicious planet but its fruit is also inauspicious. If the Moon is high then the person gets immense fame and opulence, but if it is low then the person is surrounded by diseases like cough, cold and cold. On Monday, fast and white food items should be taken to optimize the effect of Moon. Topaz and pearls can be worn. The chanting of the mantra 'Om Shram Shrimam Shram Chandray Namah' should be chanted 2 lakh 31 thousand times.

Mars: It is a planetary planet. He has authority over the three zodiac signs Cancer, Scorpio, Pisces. This fight-quarrel is the motivator of riotfassad. This causes diseases of bile, air, blood pressure, tuberculosis, itching, abdominal, razor, piles etc. If Mars in the horoscope is low then it causes havoc.

Major accidents, earthquakes, droughts are also considered to be the symbols of the ill effects of Mars, but if Mars is high then the person is rich in playful, tamoguni and personality in Kamakrida. They also buy unfathomable property. Coral can be worn to optimize the effect of Mars. Donating food items in a copper vessel and chanting the mantra 'Om Krim Kram Sas Bhumayi Namah' can be benefited 2 lakh 10 thousand times.

According to the part of every planet which represents the body, diseases occur as if Venus is a symbol of Kama art, then all body diseases are caused by the inauspiciousness of Venus. Mercury's inauspiciousness gives heart disease. Jupiter gives troubles related to intelligence. Saturn, Rahu and Ketu are the masters of the abdomen, so their obsolescence causes stomach disorders.

How to Eliminate Bad Effects Of Home Using Vastu Shastra?

10 Signs Shows That You're In A Serious Relationship