6 Marriage Commandments for a Successful Partnership 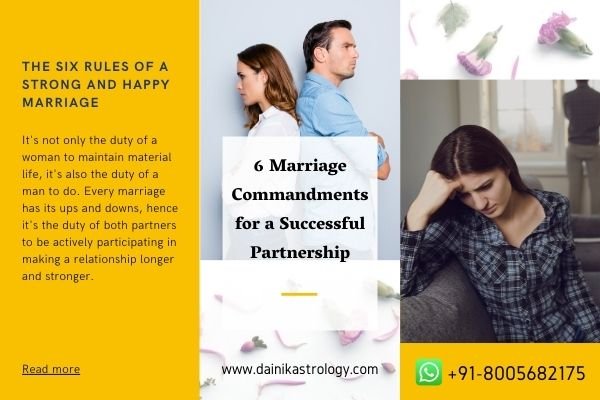 6 Marriage Commandments for a Successful Partnership

The divine regulations that God has established and commanded are referred to as the commandments. Let us now consider the worth or relevance of the Almighty's loving commands. Why are marriage commandments so important? As previously said, strong and happy relationships need continual conscious effort. The commandments for marriage are required to keep on track in the process of continually working on your marriage. You can also take marriage prediction from our famous astrologer for this, which will help in solving your problem.

Exclusivity is included in one of the first marital commandments.

When you consider the first commandment it prohibits you from having any other gods before the Almighty, you can see how it relates to marriage exclusivity.

2. Making the marriage relationship a priority

This commandment is arguably the one that is most commonly disregarded or not taken seriously among the marital commandments. Partners find it simpler to focus on their relationship before having a kid. However, after having children and adjusting to the plethora of new obligations that come with being a parent, the relationship takes a second seat. Parenting, home chores, employment, and other obligations frequently take precedence over their marital relationship.

3. It is best to refrain from speaking in a slangy manner.

Fighting the impulse to talk ill of your spouse to others, no matter how upset or furious you are with them, is another of the top marital commandments. Consider the prohibition against using the name of God in vain.

Taking your significant other's name in vain is not a good idea, either. Isn't it a bad idea to scream on social media about your disagreements or fights with your partner, or to share too much information with your friends or family? It's crucial to show respect for your in-laws. It's crucial to realise that when you marry someone, you're not simply becoming legally linked to them. Through the marriage, you've also obtained a slew of new relatives. Your mother-in-law and father-in-law are arguably the two most valuable connections that have developed from the marriage among those relatives.

Marriages may be wrecked in a variety of ways, including manipulative mind games, carrying grudges and resentments towards your beloved, considering legal separation/divorce, and infusing bitterness into your marital relationship with your beloved.

4: Don't go head-to-head with your sweetheart.

Out of the six commandments for husbands and wives, one of the most important is to avoid being competitive with your spouse.

Keep in mind that marriage isn't a competition between you and your partner over who is more successful in their professions, social ties, and so on.

1: The ability to accept flaws

This may be the simplest marital commandment to teach, yet it's also one of the hardest to follow. Humans are imperfect creatures with flaws.

As a result, burdening yourself and your partner with unreasonable expectations about your partner is both harmful and futile. Everyone has their own set of baggage. The beauty of marriage, on the other hand, is accepting one's lover wholeheartedly without any flaws.

2: The importance of the marriage relationship is prioritised.

This is arguably the most neglected or undervalued of the marital commandments. It is simpler for couples to emphasise their relationship before having a kid. After having children, however, the relationship takes a back seat as the couple adjusts to a slew of new obligations as parents.

3: It's crucial to respect your in-laws.

It's crucial to realise that when you marry someone, you're not simply becoming legally linked to them. As a result of the marriage, you've obtained a slew of new relatives.

Your mother-in-law and father-in-law are arguably the two most valuable ties that have developed from your marriage among those relatives.

4: Don't go head-to-head with your sweetheart.

Keep in mind that marriage isn't a competition between you and your partner over who is more successful in their professions, social ties, and so on. Instead of attempting to compete with your wife and maybe ruining her motivation or mood, it's far preferable to be her support system and cheerleader.

Being helpful rather than competitive in your marriage is something you should consider. It demonstrates that you aren't a petty human when you don't compete with your sweetheart.

5: Thank you for your consideration.

Physical closeness, sexual intimacy, and acts of service are all fantastic methods to communicate your appreciation, in addition to utilising the love language of words of affirmation, where you express your thanks for your spouse orally daily. It is critical to have complete financial openness.

Now, this is one of those marital commandments that can help you predict how often you'll have problems or fights with your partner. One of the most prevalent sources of tension between married couples is money.

As a result, the value of financial candour in a marriage cannot be overstated. Transparency and cooperation

6: How Astrologer Will Help You

Visiting an astrologer is a must before and after marriage. Because a good astrologer will be able to tell you the future of you together and will give you a warning signal if anything is going to happen and also their solutions. Our astrologer is well-known for his experience in determining the f of the couples and also will give sol or remedies so that there won't be any problem in their marital life.

6 Common Problems Faced by Marriage Couples and Their Solution

10 Signs a Man Is Falling in Love With You

Nadi Dosha : Effects in Kundli Milan and its Remedies

5 Common Causes of Misunderstanding and How to Solve Them

How to Say Promises to Your Loved ones on This Promise...

How to Deal With Heartbreak: 7 Ways to Move On

6 Signs You Are Being Selfish in a Relationship