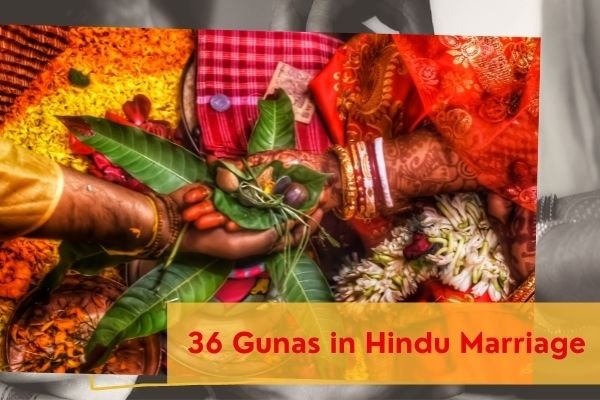 Marriage is the most auspicious event in a person's life, bringing a pair into a new chapter of life. Marriage, according to our Hindu traditions, is more than just a union of bodies; it is also a link of spirits. As a result, this is not something to be taken lightly or hurriedly.

This spiritual bond of marriage is only forged in India following the bride and groom's Kundali Milan, or horoscope matching, to ensure a joyful and successful married life.

It is believed that after marriage, the placements of both partners' planets have an affect on each other, almost as though their Kundalis and, of course, life experiences blend. It emphasises the relevance of analysing their horoscopes as a couple as well as as a separate entity.

This popular method of matching horoscopes consists of eight tests, each of which assesses a different aspect of a happy marriage life. This is also known as 'Gunn Milan.'

These gunas, or points, determine whether the match is allowed or not. Each of these eight kootas has been weighted differently, resulting in a distinct score. These heads are described in further depth on this page.

The position of the Moon in each horoscope is crucial. The moon's position and accompanying meanings form the basis for the bulk of the Ashta Koota Milan examinations. The more compatible their moon signs are, the better their prospects of a happy partnership.

Despite the fact that the ashta Koot matching process is universal, there are significant regional differences. In North and South India, the process for calculating points differs slightly. Astrologers throughout the country may apply various parameters, resulting in differing ratings. Other forms of matching besides Ashta Koota Milan include Mahendra Koota, Veda Koota, Deergha Koota, and Rajju Koota.

Ashtakoota is not just for establishing spousal compatibility!!

Kundali Milan is a technique that not only determines two people's compatibility but also covers many areas of a marriage. Whether we say it's only to see if you're compatible, we're setting up a misunderstanding. It is far more than a single characteristic. It is a complete Kundali for marriage that includes all aspects of life.

This investigation looks into their overall personality, behaviour, nature, interests, status, familial tendencies, and emotional factors. It also investigates their sensitivity, as well as their sexual closeness and desires. Matching also investigates how their combined Kundali would affect either of their health. It also considers their financial compatibility and the amount of luck they might bring to the marriage. It also takes into account their professional horoscopes.

Under the Ashta Koota Matching of Horoscopes approach, eight groups of horoscopes have been identified in Vedic astrology. Each head offers a set of suggestions for passing the specific exam. For each of these compatibility tests, a score is assigned and recorded. The ultimate score is calculated by adding the points earned under several headings or categories. However, to avoid more difficulties, this should be done by the greatest astrologer. These several categories are discussed below:

In ancient times, people were classified into one of four varnas based on where they were born. The same idea is applied here, but differently. In declining order of supremacy, there are four Varnas or Jatis: Brahmana, Kshatriya, Vaishya, and Shudra. The groom's varna must be equal or at least equal to receive a good compatibility score.

This compatibility is determined by the boy's and girl's natal stars. In Vedic astrology, there are 27 nakshatras or birth stars. The girl's natal star is subtracted from the boy's, and the result is divided by nine. Similarly, a score is calculated by counting from the boy's janma nakshatra to the girl's janma nakshatra. If the remainders produced from both are even, the compatibility score is 3; if they are odd, the score is zero; and if one of them is even or odd, the score is 1.5.

The Rashi Milan reveals the compatibility of the potential couple's moon signs. The Moon sign Lords are classified as allies, neutrals, or enemies. Five points are awarded for friendly zodiac signs, four points for one neutral and one friend, and zero points if they are foes.

This head will be used to assess the temperaments of the bride and groom. Ganas are classified into three types: Deva (gods), Manav (humans), and Rakshasas (demons). 8 points are awarded if the bride and groom are from the same gana, 1 point for everyone else, and 0 points for manav and rakshasa.

Points required for a lucky match:

Ashtkoota Milan - A key, but a not exclusive, instrument for determining the fate of a marriage.

Astrological Remedies for Marital Strife and Their Underlying...